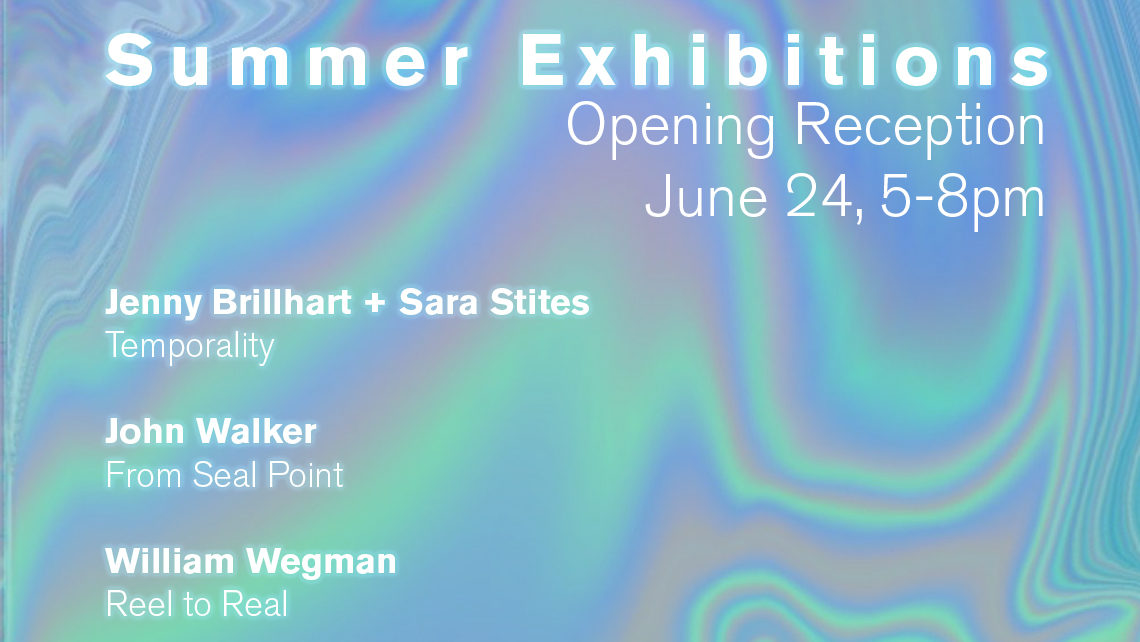 Rockland, Maine, April 28, 2017 – The Center for Maine Contemporary Art (CMCA) in Rockland is celebrating its one-year anniversary in its stunning new building, designed by internationally acclaimed architect Toshiko Mori, with an exciting and diverse lineup of exhibitions and events.

Exhibitions opening in early summer 2017 will showcase the work of artists William Wegman, John Walker, Jenny Brillhart and Sara Stites. A public reception celebrating the early summer exhibitions and artists will be held on Saturday, June 24, from 5 to 8pm.

On Friday evening, August 18, the CMCA Summer Gala will coincide with the opening of the exhibition, Linden Frederick: Night Stories, a collaboration between the artist and fifteen of America’s most acclaimed fiction writers. An artist’s reception, open to the public, will follow on Friday, August 25, from 5 to 8pm.

The notion of light moving over time offers a conceptual approach to Sara Stites (Thomaston, ME and Miami, FL) and Jenny Brillhart’s (Stonington, ME) intuitive ways of working and individual narratives. Documenting shadow movement through paint, material, and photography, the artists promote connections of process, studio, and specificity of place. Their use of found and made objects as both sculpture and subject for photography and paintings, link their work and ground their process. Light and time serve as both content and concept. This idea provides an open-ended conduit of conversation between the artists. The exhibition offers an argument for a contemplative practice, working towards an age-old search for meaning within contemporary parameters.

William Wegman: Reel to Real
June 10 – October 22
On view from June 10 through October 22, 2017, is the exhibition William Wegman: Reel to Real featuring videos and drawings from 1970-1978. An important pioneer in video art, William Wegman created hundreds of short performance-oriented videos between 1970 and 1978, which are now considered classics in the field. He began experimenting with the new medium in earnest in 1970, while living in Southern California, where he taught for a year at California State College, Long Beach. Working concurrently with other early West Coast video artists as Bruce Nauman and John Baldessari, Wegman perfected a deadpan humor and absurdist logic in his videos that came to define much of the West Coast conceptual art of this period.

It was in Long Beach that Wegman acquired his first Weimaraner, Man Ray, who became an active participant in the early videos and an iconic presence in the artist’s career. “My background is in painting,” says Wegman, “but in school in the sixties, like many artists of that time, I believed that painting was dead. I began to work in collaboration with other artists in the creation of performance and installation works. Soon after, I started making video and photographic works and in the process became fascinated with the media itself. Before long I was setting things up just for the camera. In 1970, I got a dog and he turned out to be very interested in video and photography as well.”

Born in 1943, in Holyoke, Massachusetts, William Wegman is one of the best-known and most highly regarded artists of his generation. He received a BA from the Massachusetts College of Art and an MFA from the University of Illinois, Urbana. With homes and studios in both New York and Rangeley, Maine, he continues to make videos, to take photographs and to make paintings and drawings.

William Wegman, accompanied by his Weimaraners, will discuss his work on Tuesday, July 25 at 5:30pm at The Strand Theatre, Main Street, Rockland, with a reception following at CMCA. Tickets required. Advance tickets: $10 CMCA members, $15 non-members; $20 day of event. Available online at cmcanow.org or by calling 207-701-5005.

John Walker: From Seal Point
June 24 – October 29
Featured in CMCA’s soaring Main Gallery throughout the 2017 season is the exhibition John Walker: From Seal Point, on view from June 24 through October 29, 2017. For more than two decades, artist John Walker has been painting the view from his property at Seal Point, Maine, and his tough, lush, muscular paintings from this place have been described as “existential images.” Seal Point is for Walker what Mont Saint Victoire was for Cezanne, a subject to be revisited time and again until, as the artist says, “one knows more about it than anyone else. That is what Seal Point is to me.”

For the first time, Walker’s most recent paintings of Seal Point will be exhibited together near their place of origin. The exhibition includes recent paintings and small works on paper created over the past five years and updates the exhibition, Looking Out to Sea, presented at Alexandre Gallery in New York City in 2015.

An esteemed figure in contemporary painting, Walker has been called “one of the standout abstract painters of the last fifty years” by The Boston Globe. And art critic John Yau writes, “He makes paintings that you can move around in, argue with, think about, and chew on.” From 1999 to 2014, Walker led the Graduate Program in Painting at Boston University, helping to make it known for excellence in painting at the graduate level. Prior to that he taught at Cooper Union and Yale University.

John Walker was born in 1939 in Birmingham, England, and studied at the Birmingham School of Art and at La Grande Chaumière in Paris. He has exhibited widely internationally, including representing England at the 1972 Venice Bienniale. He has lived full-time in South Bristol, Maine, since retiring from Boston University in 2014.

The exhibition, Night Stories, and the accompanying book, have been eight years in the making. When artist Linden Frederick (Belfast, ME) realized a growing number of his collectors are novelists and screenwriters, he wondered what would happen if the writer-illustrator relationship were reversed: the painting first, then the writing. The result is Night Stories. Fifteen celebrated American fiction writers each agreed to select one painting especially created by Frederick as inspiration and then, over the following months, write a unique story inspired by it.

CMCA Summer Gala
August 18, 6:30–9pm
The CMCA Summer Gala is the art center’s most important fundraising event, providing essential support for exhibitions and programs, including ArtLab, CMCA’s signature hands-on education program for all ages. Tickets to the event are $250 each and are available by reservation online at cmcanow.org or by calling 207-701-5005.

Located in the heart of downtown Rockland’s burgeoning arts district, the new CMCA opened on June 26, 2016, and provides more than 5,500 square feet of exceptional exhibition space for the presentation of work by contemporary artists. The complex also includes a gift shop featuring the work of Maine artisans and designers, an ArtLab classroom, and a 2,200-square-foot public courtyard displaying a monumentally scaled sculpture, Digital Man, by artist Jonathan Borofsky.