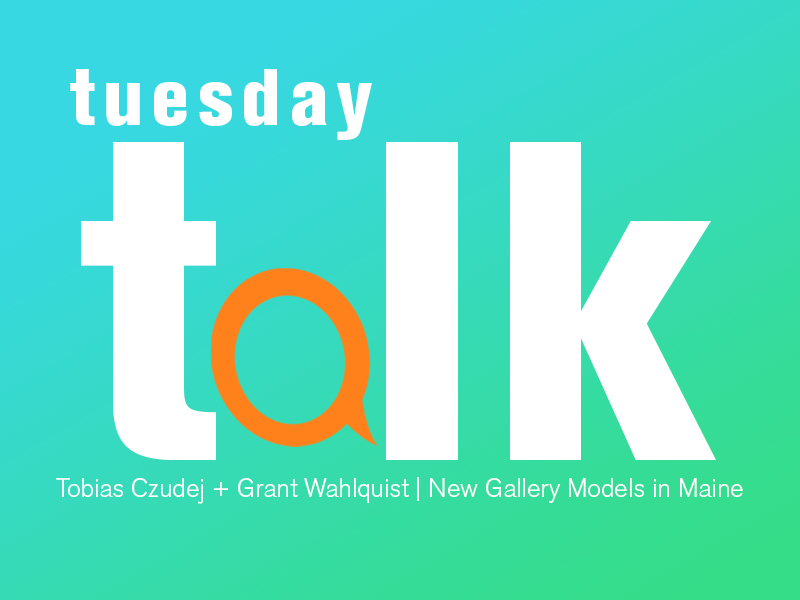 Join us for a Tuesday Talk on September 25, at 5:30pm, with gallerists Tobias Czudej of Waldo Exhibitions, Rockport, and Grant Wahlquist of Grant Wahlquist Gallery, Portland, to discuss “New Gallery Models in Maine.” Czudej and Wahlquist are breaking the mold of traditional galleries in the state by bringing cutting-edge national and international contemporary art to their recently opened exhibition venues in Rockport and Portland.

Under Tobias Czudej’s direction, Waldo Exhibitions is conceived as a series of temporary exhibitions in unique locations. This year’s program takes place in a 19th-century former dance hall in an abandoned oceanfront resort in Rockport. Czudej formerly worked for PACE and Gagosian Galleries, two of the world’s largest international galleries, and has curated temporary exhibitions in London and New York under the rubric CHEWDAY’S.

Grant Wahlquist is a freelance curator, critic and theorist, formerly based in Los Angeles, where he was affiliated with the Orange County Museum of Art. He now splits his time between Vinalhaven and Portland, Maine, where he opened the eponymous Grant Wahlquist Gallery in summer 2017, featuring thought-provoking work by emerging and mid-career artists working in diverse mediums.