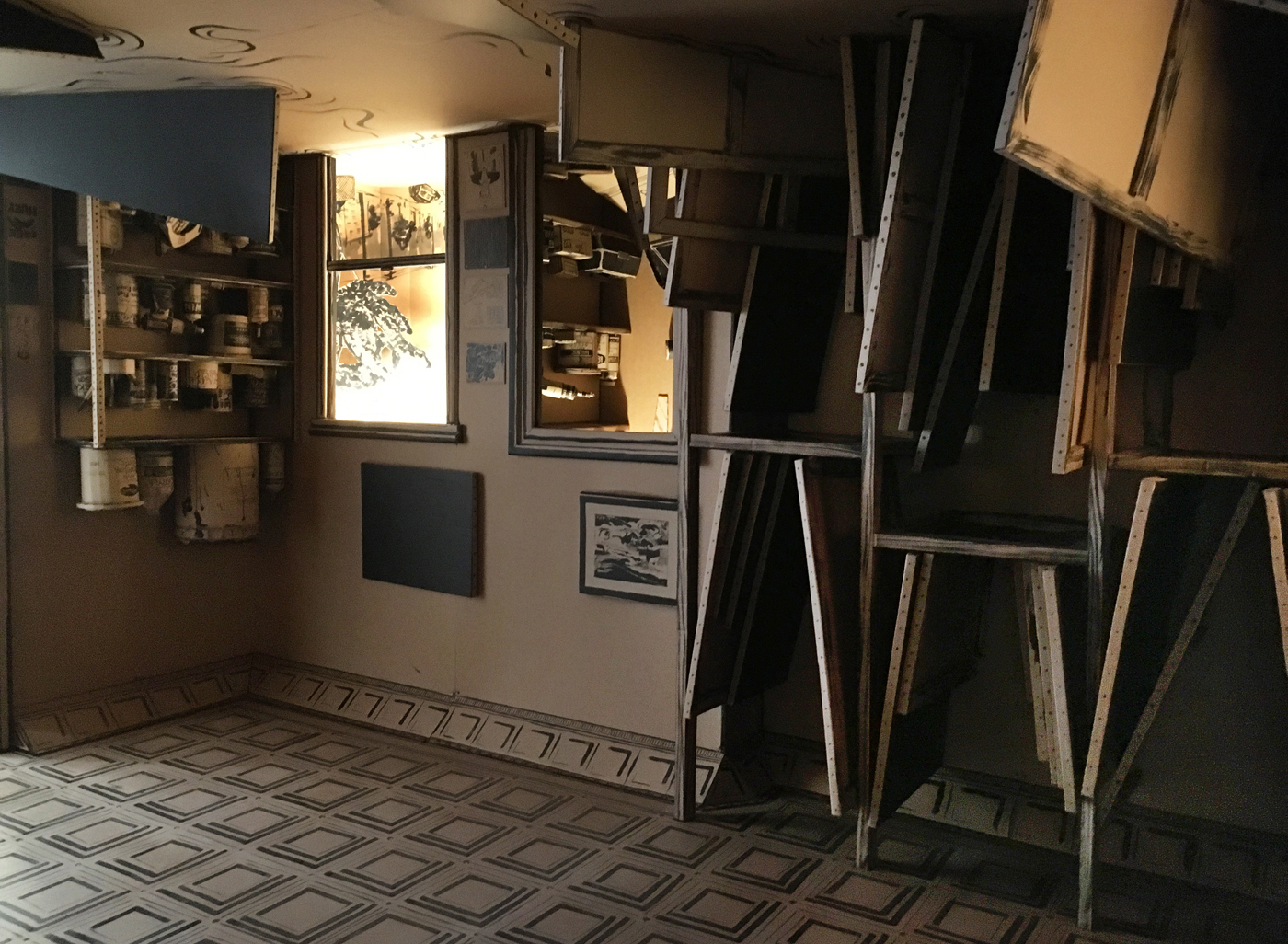 Studio Flood is a life-size, walk-in installation executed entirely in cardboard and black paint, and centered on the image of an artist’s studio that has experienced a catastrophic flood. Here the floor plane, now an extended surface of water, appears above our heads. One’s world is turned upside down, both figuratively and literally. In the floodwater, black monochrome canvases—emblems of intellect, will, and discipline—are floating and have been wrenched from their creators’ control and set adrift.

Imagine an artist who insists on separating his paintings from the “real” world only to find that world crashing in anyway. With coastal communities around the world vulnerable to rising seas and flooding, Burckhardt says, “Like most of us, I am concerned about these unsettling ecological prospects, but what concerns me most directly is reality’s clash with human creativity. Rather than address this in the macro-political sense, I find an individual’s experience can be a stronger narrative.”

An iteration of Studio Flood was exhibited at PIEROGI, New York, in Fall 2017, and at the Kochi-Muziris Biennale, Kochi, Kerala, India, in 2016.

Tom Burckhardt is perhaps best known for his paintings, which examine aspects of abstraction and often incorporate sculptural elements. Art critic John Yau writes, “By finding ways to foreground his conflicts about painting, while also expanding its definition, Burckhardt has become one of the most interesting artists of his generation.”

Center for Maine Contemporary Art presents life-size, walk-in installation by Tom Burckhardt in ArtDaily – June 21, 2018
Maine’s Mini-Mecca: Contemporary on the Coast in Artscope Magazine by Greg Morell – July 5, 2018
Art review: Rockland exhibits are upside down, in the water and all over the place in Portland Press Herald by Daniel Kany – July 15, 2018
Rockland Chronicle in The New Criterion by Franklin Einsprunch – October, 2018
Water, Water Everywhere: Tom Burckhardt’s Studio Flood in The Maine Arts Journal: The UMVA Quarterly by Michael Torlen – Winter 2019