David Row | The Shape of Things 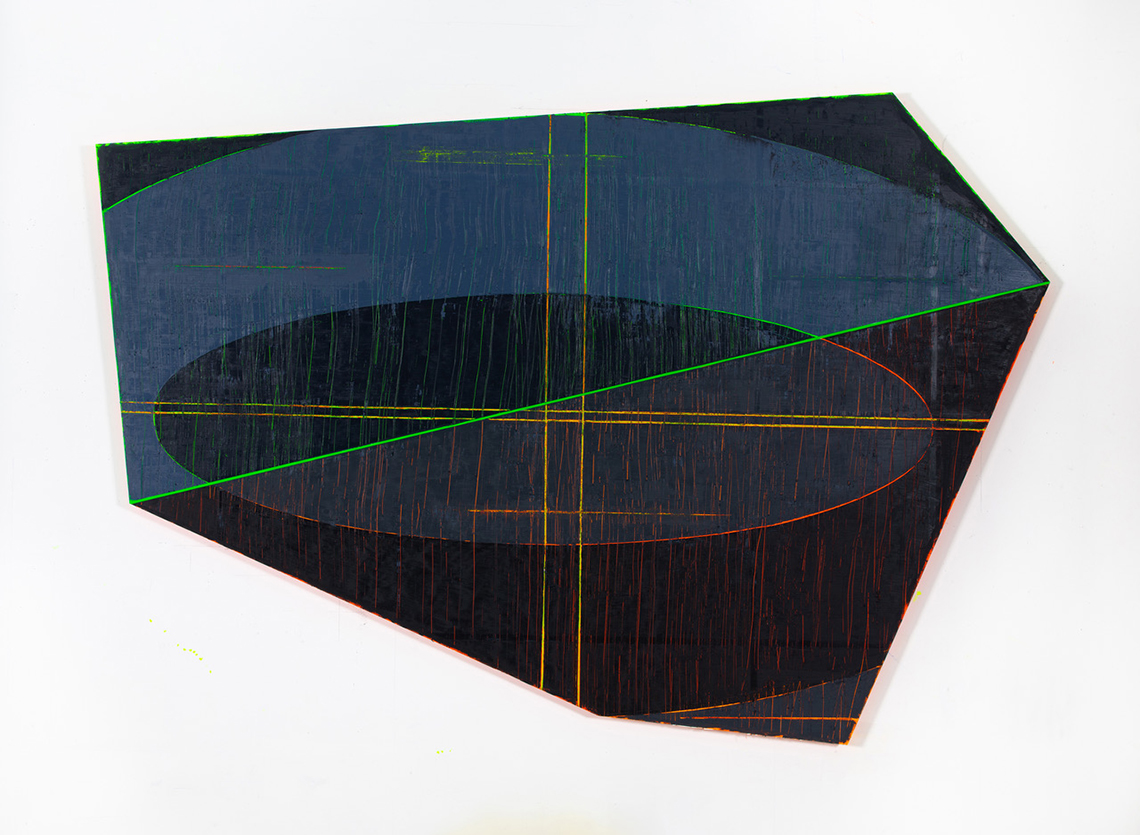 The Shape of Things is the first major exhibition of painter and master printmaker David Row’s work in his home state. Born in Portland, in 1949, Row is a multi-generational Mainer. His father’s family settled in Perry, a small town in Washington County near the Canadian border, in the early 19th century. Row visited the family homestead many times as a child and thought of it “as the wildest place I’d ever seen.”

In his teen years, Row’s family began summering on Cushing Island in Casco Bay, first in a series of rented cottages, then purchasing a house in 1968. Accessible only by private boat and with no vehicular traffic allowed, Cushing is a world apart. In the early 1990s, Row and his wife Kathleen built their own house and studio on the island. “The studio became a major part of my working life from the summer of 1994 to the present,” Row says, “I live and work there now for five months each year.”

Known for his use of irregularly shaped canvases and rich colors, Row manipulates symbols of infinity and juncture—ellipses and x’s—to create spatially complex compositions that transform the illusory two-dimensional painted plane into multi-perspectival infinite space. Citing the unabashed physicality of Row’s work, art critic Stephen Maine has described it as “calisthenic abstraction.”

Row received his BA in 1972 and MFA in 1974 from the Yale School of Art, where he studied with Al Held, Lester Johnson, and David von Schlegell. Moving to New York during the mid-1970s, he has pursued a trajectory of abstraction that begins with Brancusi and acknowledges predecessors such as Kenneth Noland, Ellsworth Kelly, and Dorothea Rockburne, while avoiding ideological traps. “Pitting one abstract element against another suggests permanent restlessness,” writes Peter Malone of Row’s work in Artcritical. “The search itself seems to be the point.”

Acknowledging his interest in the enigmatic, Row states: “For some time my work has focused on the tension between fragments and wholes. I’m not exactly sure why I’m drawn to this except that it seems to reflect the disparity between what we desire—wholeness—and what we experience—fragment. There is a mysterious and magical line between a group of separate parts and a group that becomes one whole.”

David Row has lectured and taught at numerous institutions including Cooper Union, Rhode Island School of Design, Pratt Institute, Princeton University, Fordham University, and currently at the School of Visual Arts in New York City.  His work has been featured in more than 40 solo exhibitions and more than 100 group shows worldwide, and are included in the permanent collections of many museums including, The Brooklyn Museum, The Carnegie Museum of Art, The Cleveland Museum of Art, The Portland Museum of Art, the Spencer Museum at the University of Kansas, the Hood Museum at Dartmouth College, and the Museum of Contemporary Art, San Diego, among others. He is the recipient of a National Endowment of the Arts Grant in Painting and the Isaac N. Maynard Prize for Painting, from the National Academy Museum.