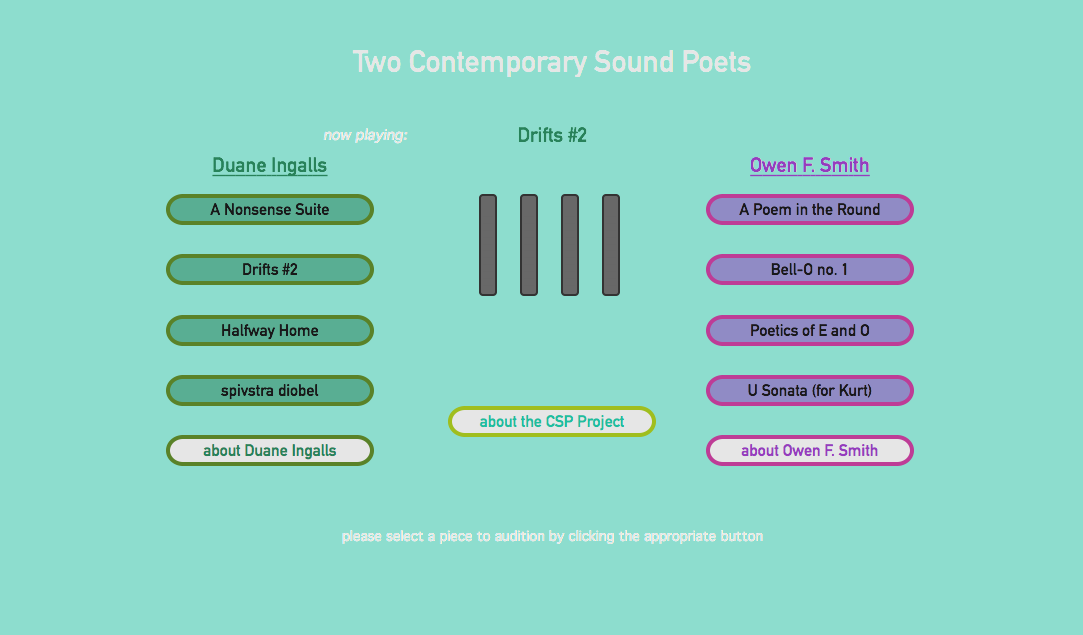 2 contemporary sound poets, a new work by sound artists Duane Ingalls and Owen Smith, is part of the Contemporary Sound Poets Recording Project. It is the first release of the Surround Project, a collaboration between the Experimental Practices Research Group, housed at the University of Maine in Orono, and Pogus Productions, based in New York. This work is a sampling from the audio-expansion of several poems written this past winter and spring. It incorporates voice and several accompanying instruments and effects.

Duane Ingalls is an intermedial artist, a behavioral therapist, and an adjunct instructor of improvisatory performance at the University of Maine at Machias. He is a member of four downeast-area ensembles: Les Trois Etoiles (improv), The Fieldguides (pop), The Crows (folk/jazz), and the UMM Ukuleles (novelty). He has taught music and art to students of all ages for nearly 20 years. Ingalls says that this current work is the latest in a “nearly life-long series of experimental text settings.”

Dr. Owen F. Smith is founder and director of the Intermedia MFA Program and the new Innovative Media, Research, and Commercialization Center at the University of Maine. He is a professor in the New Media department, where he holds the Alston D. and Ada Lee Correll Chair in New Media. He has published more than 40 books and articles, and his creative and design work has been presented in more than 90 national and international venues. Smith states that all his activities as an artist “can be said to be about language, especially the end of language as a proscriptive formula that restrictively shapes and dominates our cultural/world view.” When he questions language’s ability to “exist outside of itself, or as anything other than a tautology,” what he is trying to explore is a “laying bare of the nature of art, meaning, and cultural constructs. That is, shifting our awareness of communicative structures, art in particular, from one of seeing them as natural … to seeing them as artificial constructs that often color and control everything we see and know.”