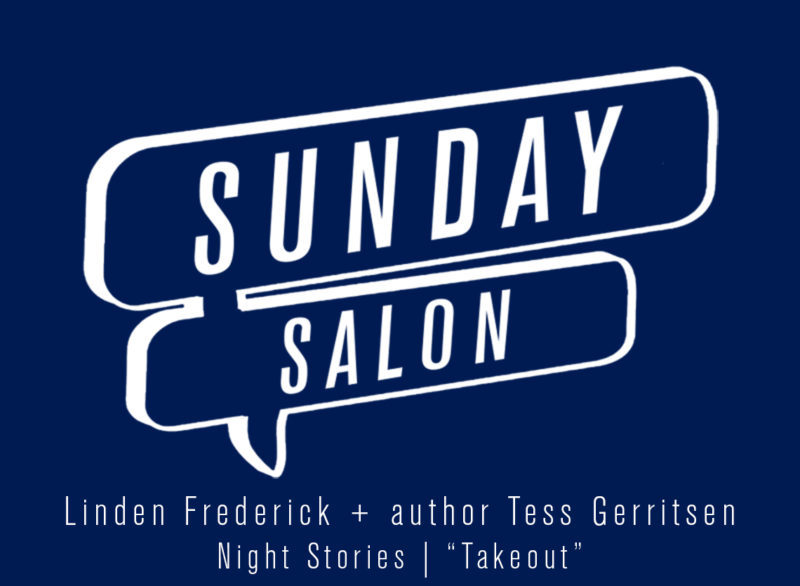 Sunday, September 17, 3-5pm
Free to CMCA members; others with admission

Join us for a Sunday Salon featuring artist Linden Frederick in conversation with author Tess Gerritsen on their collaboration, “Takeout,” a short story paired with Frederick’s painting of the same name, featured in the newly published book, Night Stories: Fifteen Paintings and The Stories They Inspired.

Internationally bestselling author Tess Gerritsen graduated from Stanford University and went on to medical school at the University of California, San Francisco, where she was awarded her M.D. While on maternity leave from her work as a physician, she began to write fiction. In 1987, her first novel was published. Call After Midnight, a romantic thriller, was followed by eight more romantic suspense novels. Her books have been top-3 bestsellers in the United States and number one bestsellers abroad. She has won both the Nero Wolfe Award (for Vanish) and the Rita Award (for The Surgeon). Critics around the world have praised her novels as “Pulse-pounding fun” (Philadelphia Inquirer), “Scary and brilliant” (Toronto Globe and Mail), and “Polished, riveting prose” (Chicago Tribune). Publisher Weekly has dubbed her the “medical suspense queen”. Now retired from medicine, she writes full time. She lives in Maine.