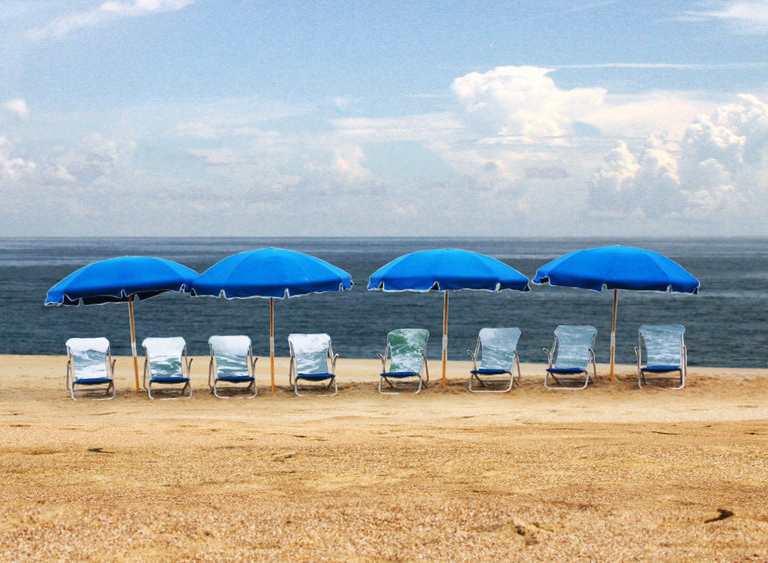 RESORT and QUENCH are two recent collaborative video works by artists Andrew Ellis Johnson and Susanne Slavick that frame the global refugee and migration crisis through the lens of the sea.

In RESORT, 2016, the immensity of the sea is oddly stilled. There is no lull in the light that cycles from dawn to dusk across a sandy stage. The bodies that lounge on beach chairs are absent, unavailable or unwilling to assist those bodies that are anxious, vulnerable and desperate, bodies forced to abandon all that was once familiar and stable, bodies that may sink and be subsumed. The chairs are turned away from the sea, avoiding those heaved on its waves. Still, roiling waters churn across the empty seats. The turmoil is both private and collective, severed into the single frames of each seat and flowing continuously across the row. The invisible surges into visibility. The crisis is not at bay.

The boundless sea lulls and mesmerizes patrons of seaside resorts. The open sea, however, is a last resort for migrants and refugees. For them, the comforts of home have been replaced by perils. For them, the sea offers neither pleasure nor leisure. It is an unpredictable and dangerous expanse toward shores that may welcome or repel. More than 3700 refugees and migrants died while crossing the Mediterranean in 2016.

QUENCH, 2014, presents a sea partitioned with rhythmic waves ebbing and flowing, in and out of sync. Its split zones speak of division. The wall of sea and sand intermittently fades to reveal a sectioned wall of concrete with fragments of graffiti. The expanse of water and the infinity of sand paradoxically are the very construction materials that comprise this barrier that limits so many possibilities.

More than a million migrants and refugees made their way to Europe in 2015. The vast majority arrived by sea, fleeing homes that could no longer shelter and lands that threatened their very existence. The sea looms large in our imagination, regardless of where we live. The sea in the Old Testament offered salvation to the fleeing Israelites as Moses and the Lord parted its waters, the same waters that subsequently closed over the Egyptians in pursuit. Today in Israel, the fear of being driven into the sea has not subsided, despite the fact that it is Palestinians who are being driven from their land, creating more than 6.6 million refugees and an ever shrinking homeland.

Andrew Ellis Johnson’s work has appeared in galleries, festivals, public collaborations, conferences, and publications in the Americas, Europe, Asia and the Middle East. He has performed as co-founder of the collective PED in Buffalo, Belfast, Chongqing, Rio de Janeiro, St. John’s, and Toronto. He studied at the School of the Art Institute of Chicago (BFA) and Carnegie Mellon University (MFA) in Pittsburgh, where he is Associate Professor of Art. Recent residencies and exchanges include those at Korean National University of the Arts, Seoul; University of the Arts London, Camberwell; Fayoum International Art Center, Egypt, and Sites of Passage, Jerusalem/Ramallah/ Pittsburgh.

Susanne Slavick is an artist, curator and the Andrew W. Mellon Professor of Art at Carnegie Mellon University where she served as Head of the School of Art from 2000-06. Slavick graduated from Yale University, and subsequently studied at Jagiellonian University in Krakow, earning her MFA at Tyler School of Art at Temple University in Rome and Philadelphia. Her work has been recognized through fellowships from the National Endowment for the Arts and four awards from the Pennsylvania Council on the Arts.  She has exhibited internationally, with more recent solo shows at the Chicago Cultural Center, McDonough Museum in Youngstown, Accola Griefen Gallery in New York, and Bernstein Gallery at Princeton University.

SCREEN is an ongoing CMCA series featuring current video work by artists with a connection to Maine.