DANIEL MINTER + ENEIDA SANCHES | THROUGH THIS TO THAT 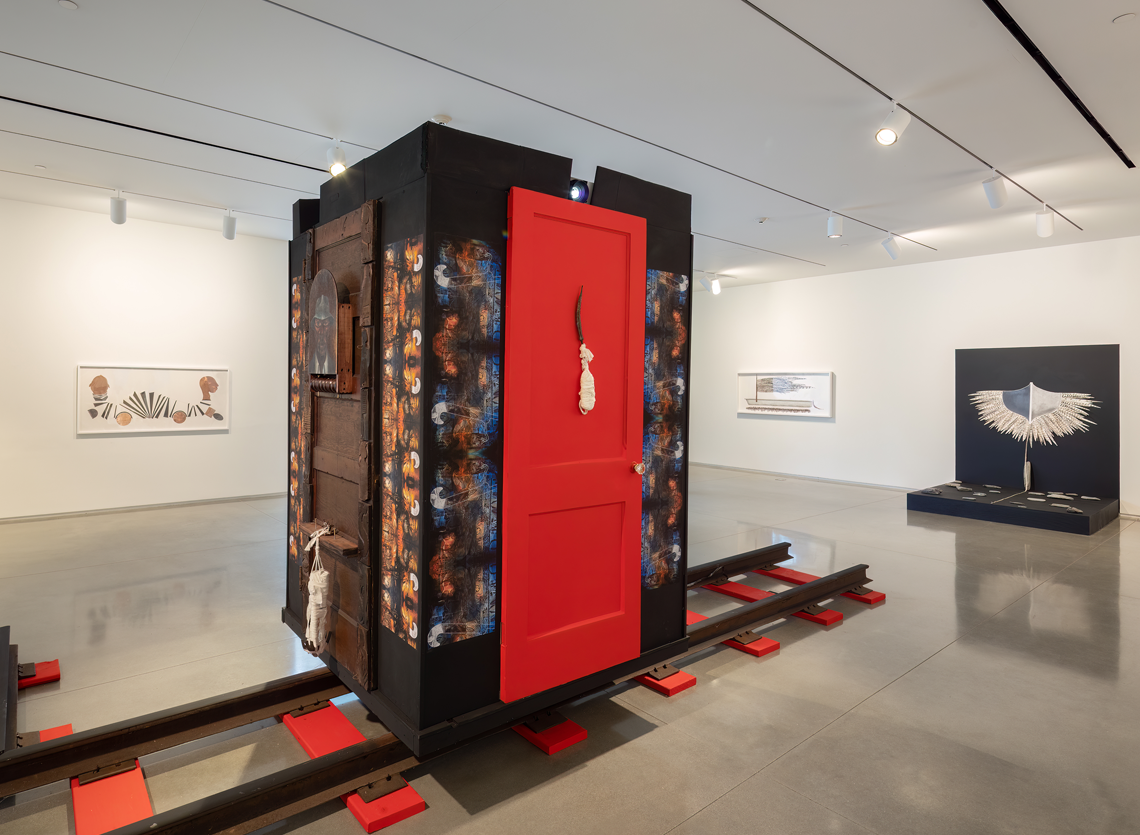 Daniel Minter and Eneida Sanches’ collaborative, immersive installation, through this to that explores the artists shared cultural histories as citizens of the African Diaspora in the United States and Brazil (respectively). The exhibition will take visitors on a sequential journey through an 1,800 sq ft installation featuring video projections, painting, sculpture, assemblage, large scale sculptural environments and interactive works.

Minter and Sanches focus on two interrelated axes — Transportation and Transmission. Transportation serves as a metaphor for the displacement of people over place and time, with the exhibition featuring artworks referencing ships, railways, and footsteps – mechanisms of movement that convey both involuntary and voluntary histories.

Transmission is an unpacking of the ways in which these methods of transportation have impacted lived experiences by people of the African diaspora. Shared cultural histories are embodied even across distances. Transmission moves between the human and non-human worlds including communication with plants, rocks and all natural things.

No matter where they are taken or choose to go, people of African descent are everywhere.

Daniel Minter is an acclaimed artist known for his work in painting and assemblage. His overall body of work often deals with themes of displacement and diaspora, ordinary/extraordinary blackness, spirituality in the Afro-Atlantic world, and the (re)creation of the meanings of home.

Minter has exhibited extensively at venues including the Portland Museum of Art, Seattle Art Museum, Tacoma Art Museum, Bates College Museum of Art, Center for Maine Contemporary Art, Bowdoin College Art Museum, and the Northwest African American Art Museum, among many other venues. Minter is the recipient of the prestigious Joyce Award and the distinguished Caldecott Medal (both 2021). He has illustrated over fifteen children’s books, many of them award winning, including the Coretta Scott King Illustration Honor. Minter was also commissioned in both 2004 and 2011 to create Kwanzaa stamps for the U.S. Postal Service. As founding director of Maine Freedom Trails, he has helped highlight the history of the Underground Railroad and the abolitionist movement in New England.

For the past 15 years Minter has raised awareness of the forced removal in 1912 of an interracial community on Maine’s Malaga Island. His formative work on the subject of Malaga emerges from Minter’s active engagement with the island, its descendants, archeologists, anthropologists and scholars. This dedication to righting history was pivotal in having the island designated a public preserve.Minter serves as co-founder of Indigo Arts Alliance (Portland), a non-profit dedicated to cultivating the artistic development of people of African descent. To date the organization has hosted over 28 Black and Brown artists from across the globe.

Minter was born in Georgia and is based in Portland, Maine. He is a graduate of the Art Institute of Atlanta and holds an Honorary Doctorate of Arts from The Maine College of Art and Design.

Eneida Sanches’ return to the visual arts was inspired by her interest in making brass and copper Afro-Brazilian religious tools as an apprentice to the Bahian master metalsmith Gilmar Conceição. In 1992, she began exhibiting these objects in art galleries in Brazil and internationally. In 1997, as a visiting professor in the Master’s program at UFBA and, subsequently, through teaching workshops at the Museum of Modern Art of Bahia, Sanches brought these different forms of constructive thought together.

Drawing from her expertise as an architect combined with her training in creating the tools of the Orisha, she developed a practice utilizing metal etchings as her primary medium. Sanches’ production explores the idea of Trance as a religious phenomenon and the collective social representation of Afro-Bahian culture and its histories. Her iconographic repertoire originates in the universe of Candomblé ritual and its functional order. Her ten thousand prints result from hundreds of copper plates, a convergence of etching and sculpture.

Sanches was born in Salvador, Bahia and lives and works in São Paulo. She holds a degree in Architecture from the Federal University of Bahia (UFBA).

The exhibition and its associated programming for through this to that were made possible through the support and expertise of Indigo Arts Alliance. Daniel Minter serves as IAA’s Artist Director and Eneida Sanches was IAA’s inaugural Artist in Residence (2019). It was during this residency that the concept, ideas and collaboration for this exhibition began. A foundational aspect of Indigo Arts Alliance’s mission is to amplify and empower Black and Brown artists who enrich our global community. For more information about Indigo Arts Alliance, please visit their website, https://indigoartsalliance.me/

Header image: through this to that installation view. Photography by Dave Clough.