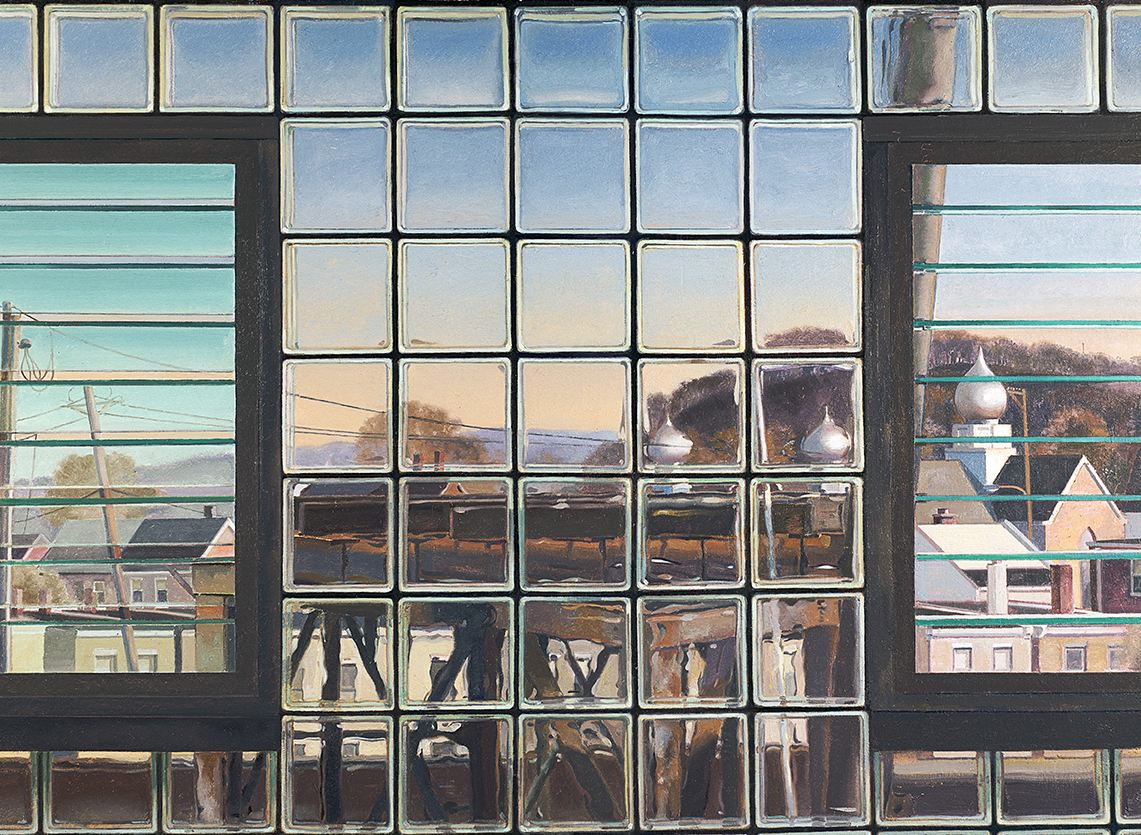 This survey exhibition of paintings and drawings by John Moore (b. 1941) is the artist’s first solo exhibition in a Maine museum, and his first at CMCA (then Maine Coast Artists) since the group exhibition, Looking at the Land, in 1993. A highly esteemed teacher and painter, with more than forty-two solo exhibitions to his credit, Moore has lived and worked in Belfast, Maine, for more than a decade, first seasonally and more recently full-time, since retiring from the University of Pennsylvania, where he was Chair of the Department of Fine Arts from 1999 to 2009.

Moore’s evocative, beautifully rendered composite images have garnered him a wide circle of ardent admirers, including poet and critic Vincent Katz, who, in 2013, composed a series of five poems in response to Moore’s paintings, one of which, Frankford Station, is included in the exhibition catalog. In the catalog essay, Christopher B. Crosman, writes, “Moore’s montage sensibility takes painting back to its post-medieval roots and then slowly, smoothly, smartly, almost imperceptibly, imposes a contemporary pictorial logic of being in an unfixed present while simultaneously existing in several places, times, moods, or even styles, all at once. Only painting can do that. And Moore…quietly, clearly, inexorably makes us aware of this simple fact.”

Completed primarily in the artist’s Belfast, Maine studio in the past decade, the paintings are derived from drawings, on-site visits, sketchbook notations, photographs, and other source material. Moore’s Midwest origins, and the remembered working class culture of his upbringing affect the choices that inspire these works, which are marked by personal experience and by the “weathered weight of time.” They range from a mill town in eastern Pennsylvania and a manufacturing site in Philadelphia, to urbanized locations from Bangor to Belfast in midcoast Maine.

The works are all studio constructions that represent what Wallace Stevens refers to as “the incessant conjunction between things as they are and things imagined.” The paintings are mainly composites rather than accurate depictions of actual places and are put together in a way that is intended to appear seamless. Some of them are close to the appearance of a specific site; some depart considerably. Everything in them is real however, or should have been real, or could be real. That’s the only rule: it could be real.

John Moore was born in St. Louis, Missouri, and received his BFA from Washington University and his MFA from Yale. He has had 42 solo exhibitions since 1970, primarily in New York. His awards include two National Endowment Fellowships, the Academy Award in Art from the American Academy of Arts and Letters, two Childe Hassam awards from the American Academy, and an Honorary Doctor of Fine Arts from the Lyme Academy College of Fine Arts in Old Lyme, Ct. His work is in many museum collections including the Metropolitan Museum of Art, the Museum of Fine Arts, Boston, the Chicago Art Institute, the Yale Art Gallery, the Colby College Museum of Art, and the Portland Museum of Art, among others. He has taught at the Tyler School of Art, the Skowhegan School of Painting and Sculpture, the University of California, Berkley, Boston University, and the University of Pennsylvania. He lives in Belfast, Maine.

The exhibition is accompanied by an illustrated catalog with an essay by Christopher B. Crosman, former director, Farnsworth Art Museum and founding curator, Crystal Bridges Museum of American Art, and a poem by critic and poet Vincent Katz.

In the Press
Capsule Previews in Artscope Magazine by Brian Goslow – May 3, 2018

Who Do You Love? John Moore