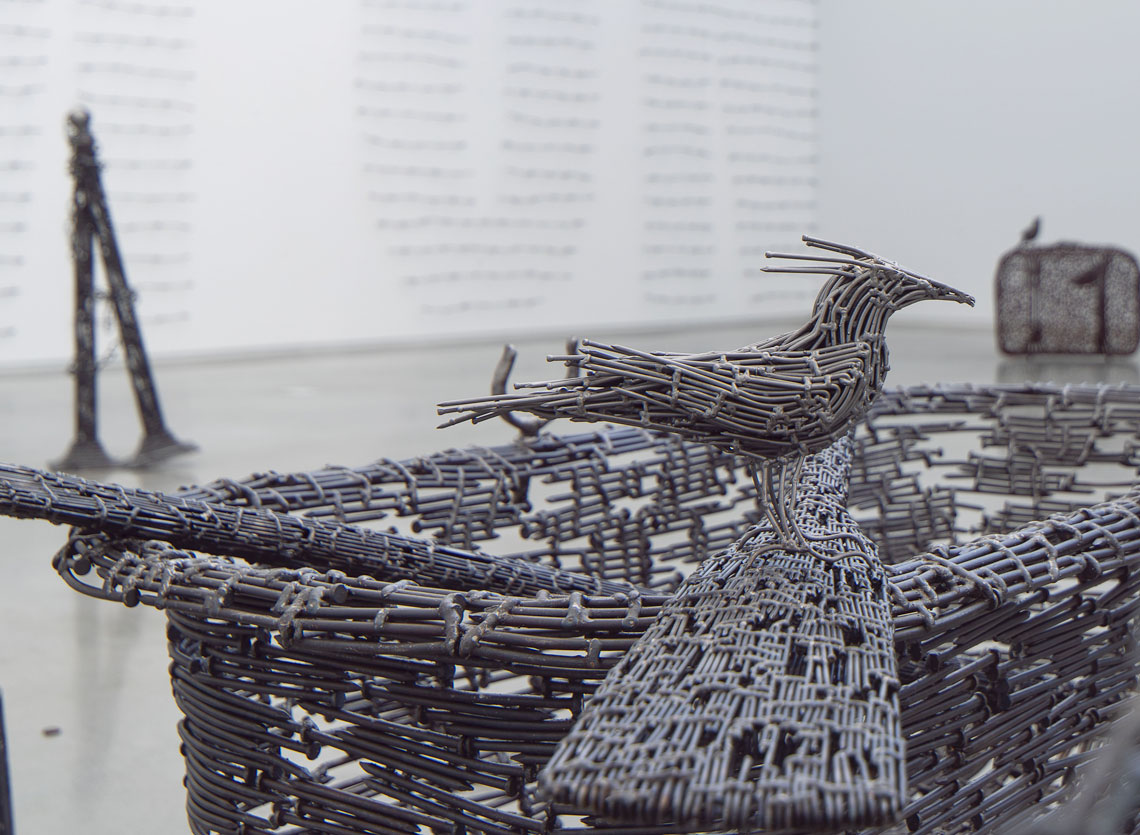 American Steel is the first solo exhibition in Maine of sculptor John Bisbee’s work in nearly a decade. Bisbee, a resident of Brunswick, Maine, is celebrated for his masterful work created exclusively from forged and welded nails, transforming their simple form into sculptures that defy the imagination.

As Glenn Adamson writes in the catalog essay accompanying the exhibition, “We hear a lot these days about the decline of American manufacture. Communities in the so-called ‘rust belt’ are struggling to cope with the rise of robotics, outsourcing to factories abroad, and an overall shift to the digital sector. This upheaval has taken generations to unfold. But it’s now upon us, and is taking a toll in our economy, our politics, and on families across the USA. It is against this backdrop that John Bisbee crafts his sculpture.”

Constructed entirely from nails, by hand, Bisbee’s objects draw on a deep well of American historical and vernacular imagery. They are made in a spirit of solidarity with workers of all kinds; each nail expresses the idea of things joined together. Yet the exhibition also has a critical edge. Bisbee uses poetic language, narrative imagery, and potent emblems to express his concern with our country’s direction. American Steel is thus a statement on current affairs: in his own words, an “abstraction of who we are, right now.”

Glenn Adamson is the former director of the Museum of Arts and Design, New York, and is currently a senior scholar at the Yale Center for British Art, and the editor-at-large of The Magazine Antiques. His publications include Art in the Making (2016, co-authored with Julia Bryan Wilson); Invention of Craft (2013); Postmodernism: Style and Subversion (2011); The Craft Reader (2010); and Thinking Through Craft (2007).

John Bisbee (b. 1965) received his BFA from Alfred University and attended the Skowhegan School of Painting and Sculpture. He has had residencies at MacDowell Colony and Yaddo. He has had more than two dozen solo exhibitions since 1993, including at the Albright-Knox Art Gallery, Buffalo, New York; the Kemper Museum of Contemporary Art, Kansas City, Missouri; the Shelburne Museum, Shelburne, Vermont; the Snite Museum of Art at University of Notre Dame, Notre Dame, Indiana; and a mid-career retrospective at the Portland Museum of Art in Maine, in 2008.

A recipient of a 2006 Joan Mitchell Foundation Grant, he has also received a State of Maine Individual Artist Grant, the Rappaport Prize administered by the DeCordova Museum and Sculpture Park, and both the Purchase Prize and the William Thon Jurors’ Prize awarded through the Portland Museum of Art’s Biennial Exhibition.

John Bisbee’s work has been reviewed in Art in America, ARTnews, Sculpture Magazine, The New Yorker, The New York Times, The Village Voice, and The Boston Globe. It has been featured in Colossal, American Craft Magazine, Art New England, Maine Home and Design, Portland Press Herald, and The Burlington Free Press, among others.