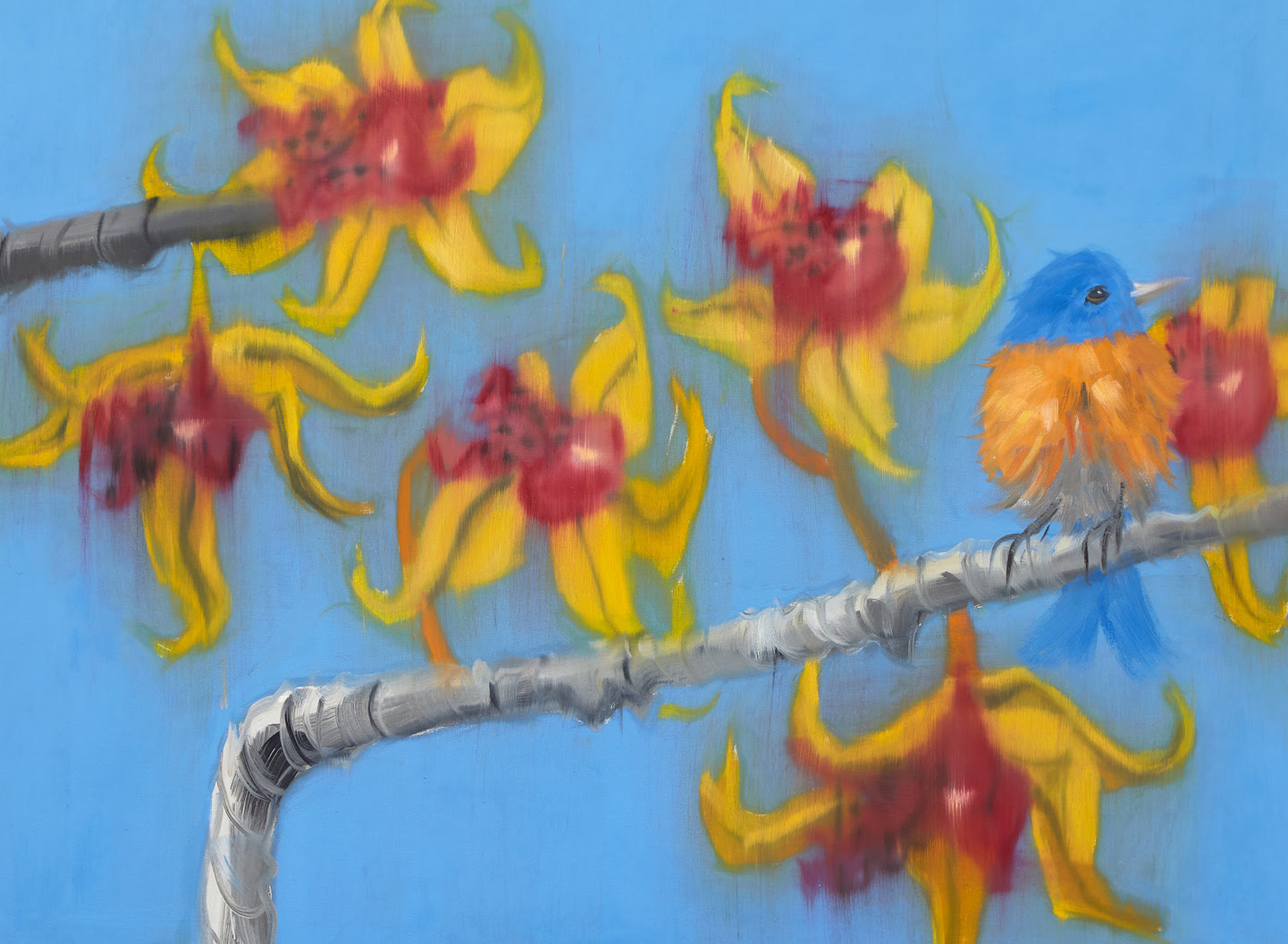 Ann Craven (b. 1967) is renowned for her lushly colored, mesmerizing portraits of the moon, birds, flowers, and other iconic images which she revisits in serial fashion, as well as her painted bands of color called Stripe or Band Paintings, which document her process. Craven says, ”My paintings are a result of mere observation, experiment, and chance, and contain a variable that’s constant and ever-changing—the moment just past. The stripes are so I can see what I just mixed. The mixing process is a very unconscious progression and so the stripes are a way to list the colors that I just painted. It is a memory and a documentation of the work at the same time.”

Craven has been painting in Maine since the early 1990s. First in a borrowed barn near Slab City Road in Lincolnville, then from her own barn that she converted to a studio, on a farm she purchased nearby. Lincolnville and the surrounding mid-coast region has harbored artists for decades, beginning in the 1960s when Neil Welliver, Alex Katz, Lois Dodd, and other New York-based artists began summering in the area. It was on Lincolnville beach, a small strip of sand anchored by The Lobster Pound restaurant, that Craven painted her first “Moon” painting in 1995. The experience “gave me my subject matter,” she says. “I was literally chasing the moon.”

For Craven, painting serial versions of the moon on site was a way to conflate the momentary with the constant. The moon became for her, a symbol of time and memory, themes that remain the primary focus of her work. The paintings of birds soon followed, inspired by color-plates found in her Italian grandmother’s vintage ornithology books. Like the moon the birds serve as a touchstone for memory, each repetition of the image a revisiting of a moment, a recalling of loved ones.

In 2008, Craven moved from Lincolnville to an historic home on the banks of the St. George River in Cushing. The property had an old garden shed that became her new studio and, importantly, a majestic purple beech tree hugging the shore. This hundred-plus-year-old tree gave Craven her newest motif. “It reminded me of the moon,” she says, “because it was round and because of all the life it had seen. Families coming and going, life lived. Like the moon it’s a constant that ebbs and flows, but the opposite of the moon in that it changes with the day, and becomes a silhouette against the sunset.”

Craven is a diarist, each of her paintings is inscribed with the date and time of its making, and she meticulously inventories and records each year’s work. Recently she began exhibiting her extensive series of Untitled (Palettes), ranging from 1999 to present. Painting wet on wet in oils, she mixes her colors on light-duty pre-stretched canvases. “The Palettes are my indexed color inventory,” she says. “They are a way for me to hold on to what I just painted—a moon or flower or bird. I sometimes tag the top of the palettes with a quick drawing of what I just painted. I always date and title the palettes the same as the paintings that they came from. After that the paint is physically useless. The abstraction in the palettes and stripes informs the figuration in my work, and vice versa, and further brackets how they work together, in the context of how my exhibitions are conceived and installed.”

Ann Craven | Birds We Know is the artist’s first exhibition in Maine. It will be accompanied by an illustrated catalog with an essay by Christopher B. Crosman, former founding curator, Crystal Bridges Museum of American Art and former director, Farnsworth Art Museum. She is represented in NYC by KARMA.