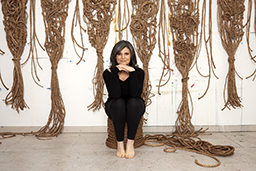 Born and raised on the Upper West Side of Manhattan, Susan Beallor-Snyder’s creative, inquisitive nature led her to explore different mediums over the course of her life. As a young artist, her focus was black and white street photography. Then, inspired by finding a great aunt’s collection of beads, she pursued a successful career as a classical goldsmith creating striking sculptural pieces.Those hand-fabricated pieces led Beallor-Snyder to her current focus of large-scale sustainable natural manila rope forms. Using a free-weaving technique to create one-of-a-kind sculptures, she infuses varying weights of the rope with thought-provoking depth and profound emotion. Beallor-Snyder’s inspirations come from the natural world, personal experiences or the experiences of others.Beallor-Snyder’s sought-after work is in corporate and private collections throughout the U.S. and she recently completed two commissioned installations. Changing Tides, inspired by the long and varied history of the Southwest waterfront along the Potomac, now hangs in The Wharf, the landmark mixed used development in Washington, D.C. Ascending, at Broadstone Ridge luxury residences outside Atlanta, was inspired by the Chattahoochee River nearby.In addition to working as an artist, Beallor-Snyder has a background in film and television production and a passion for natural foods and holistic living. She and her husband, Stuart, have two daughters and split their time between New York, Maine and Connecticut
END_OF_DOCUMENT_TOKEN_TO_BE_REPLACED