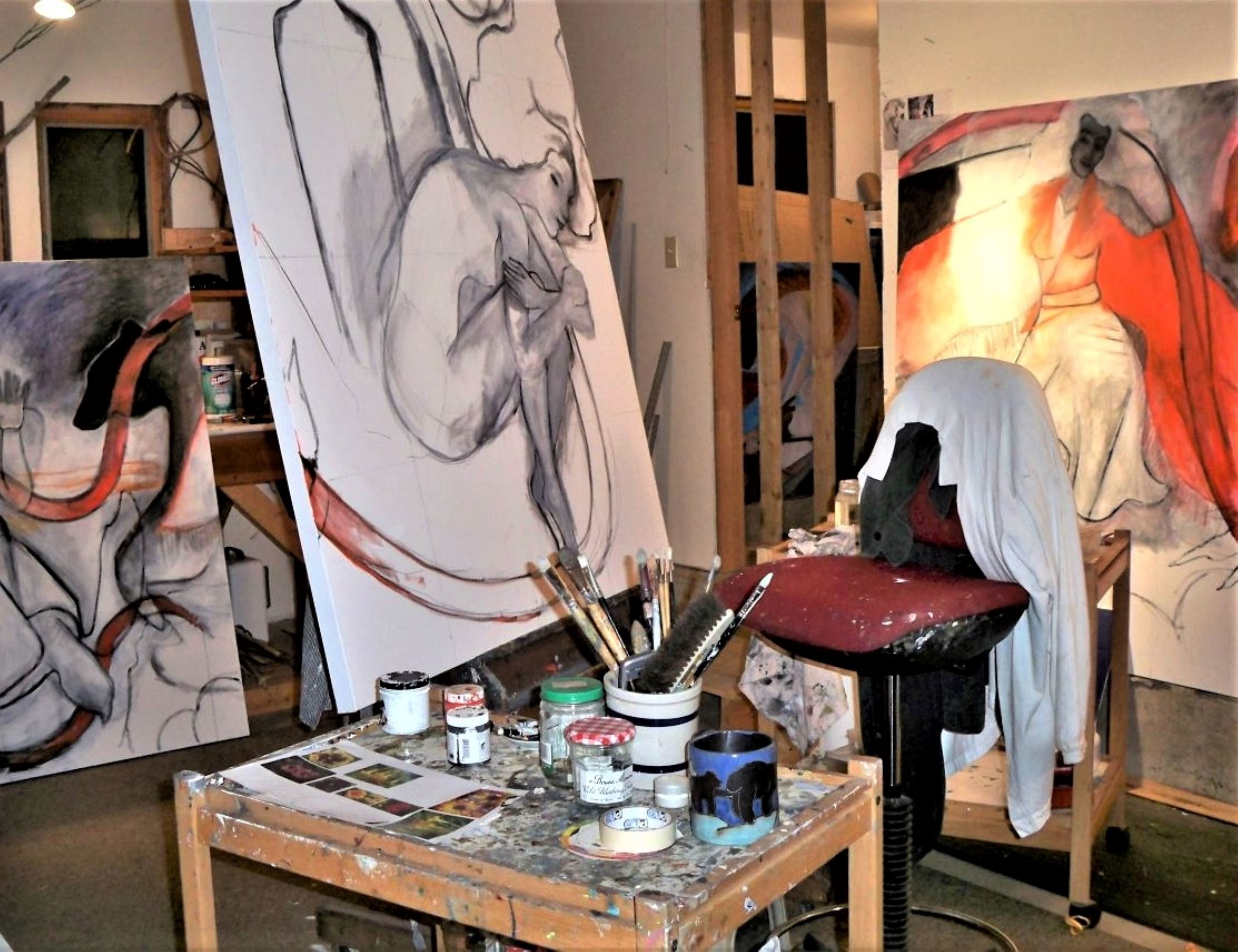 “Creating a work of art is essentially a conversation between artist and image that begins before brush is put to canvas, and continues on long after the work is physically completed.”

Contemporary physicists are now theorizing that we live in a world made up of potentially countless parallel realities. This is something that shamans have always known. As a feminist shaman with over thirty years of experience, I have visited one such parallel reality – shamanic reality – countless times.As an artist, it appears that I may always have been subliminally aware of the existence of other realities, as evidenced by some of my early work. However, it wasn’t until after I was initiated into the path of a shaman by the Bear Spirit Clan during an out-of-body experience triggered by a studio explosion in which I was severely burned and most of my work was destroyed that I became able to fully express the nature of the landscapes and inhabitants of shamanic reality in my work.Some of my these paintings, such as “The In-Between,” and “The Dancer and the In-Between,” the twelve by five foot triptych are images depicting shamanic healing being carried out in shamanic reality.Others, such as “The Secret,” depict moments when shamanic and physical realities merge, becoming one. Such paintings are usually inspired by actual events in physical reality that serve as conduits for messages from shamanic reality. Still other paintings are the result of shamanic energies observed while in shamanic visionary states.Because I live on, love, and have closely observed the Downeast Maine coast my entire life, I am also frequently inspired to paint it. I’m particularly interested in the energies of storms, and light and ice on the sea and the springs and streams that feed it.Technically, my paintings are very much about painting itself; about pushing limits and relaxing preconceived ideas to imbue the work with certain energies or to create certain textures, interplays of color, light, value, or line on the canvas. All of these influences are present in my current work, informing each decision I make from start to finish for each and every painting. I am also a writer, and, assisted by my shamanic apprentices, occasionally present shamanic performances created by combining art, writing, and shamanic energy. Such performances consist of shamanic storytelling, accompanied by drumming, chanting and singing, against a backdrop of large scale projections of artworks related to the story. This work has evolved over time into The Stone Coast Goddess Project, in which the myths of goddess archetypes residing within Maine’s stone coast are shared as shamanic healing ceremonies meant to help balance our very out of balance world.

I was born in Ellsworth, Maine, and raised there, also spending large chunks of my childhood in New York city, and St. Petersburg, Florida. I also spent several years as an adult painting in the Southwest. I began making art at a young age, and because there were no art classes in the Ellsworth schools at that time, my mother sent me to study with our only local art teacher, “Miss Elise.” I was very lucky to also be able to observe Jack Harris, a local watercolor artist, at work, he being the father of one of my best friends. Because I married very young and was very Catholic at that time, I had four children in rapid succession, which prevented my devoting much time to making art until all four were in school all day. I then completed all the studio art courses and undergrad requirements at UMO, and transferred to Goddard College, where I earned a B.A. with a double major in studio art and creative writing. Much later in life I earned an M.A. in Mythological Studies with an Emphasis on Depth Psychology from Pacifica Graduate Institute, as I felt a strong need to locate and understand the meaning of my shamanic initiation experience within a context larger than personal experience.Currently, I live and work in Surry, Maine, not far from Morgan Bay, which is often my source of inspiration for paintings of the coast. My home contains my teaching center, The Standing Bear Center for Shamanic Studies, as well as my working studio and my gallery, Turtle Mountain Mythic Art, both of which are open during the summer Wednesday – Saturday from 11-5, and other times by appointment.