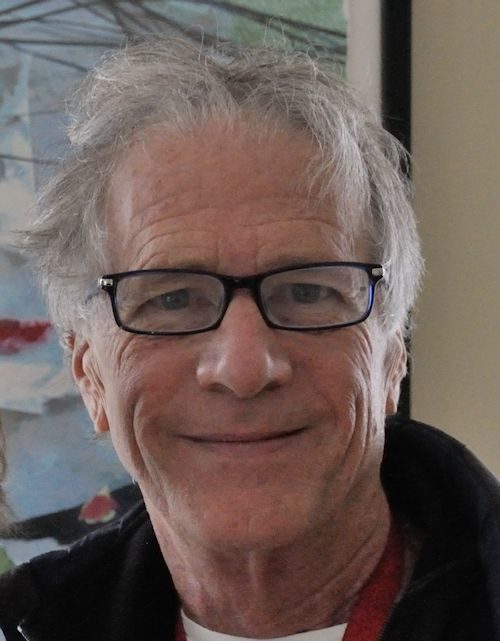 One look at Russell's paintings reveals exactly who this artist is; he possesses a sense of humor, has an insightful observation of gesture and movement and a unique compositional style that invites your attention into the world he creates.  The work invokes the feeling of calm and relaxation away from life's everyday demands.

Attending a progressive public high school in New Jersey during the 60's his curriculum allowed him to take many art related classes.  From there he studied at the Art Students League in NYC all along while studying fine art and graphic design at The Newark School of Fine Art.

Inspired by life in rural Maine he, his wife Linda and sons packed their VW bug and moved from New Jersey to the coast of Maine, Bar Habor in 1974. In the early 80's they began their own screen print business.

Winning many awards during this period of his career he was written up in major trade magazines for his screen print and painting techniques on apparel.  Excited by retail they opened their own space in 1989. This Bar Harbor gallery is now in its 29th year.

The Maine life had always been the filter through which he dreams through, as a painter, this landscape has been an incredible inspiration and root cause of his works for over 40 years.  The sense of Maine magic and the experience of his travels persist in each of his works; he begins painting from the abstract and finds his way to the figurative.  His signature works are paintings and drawings of women engaging in the mysteries and the unexpected joys life brings, sisters, girlfriends, the women we know and love.

Russell's art displays chromatic and thematic richness.  His choice of subject has been strongly influenced by his zest for life, therefore creating color and movement.  His zany sense of humor brings out the occasional whimsy and his sensitivity to the human form allows him to create beautiful flowing figures.  Persistence in creativity has permitted him to develop into a sensitive and mature artist.  D'Alessio's expression of universal humanistic ideals, connecting man to his physical surroundings flows easily through his works that have a timeless appeal.

Moving Toward the Infinite

"The eye, a strange balloon, moves toward the infinite" a 19th-century lithograph by Odilon Redone was the first artwork to capture my imagination when I was a teen. To me, this print speaks volumes about art life and human potential. Its foreground anchors us at the water's edge while a large hairy eyeball floats above the horizon like a mythical balloon, carrying our hopes toward the heavens. Its frightful appearance is somehow neutralized by its lofty intent.

The best works of art come out of this push and pull swing of emotion. Love and hate, fear and desire. The tragic to the sublime are the tensions that somewhere in between we find the intrigue we call art. Art comes from somewhere outside our conscious intentions. Too much deliberation can be toxic, leaving it void of spirit and lacking emotion, I mostly begin painting from the abstract and find my way toward the figurative. The challenge is not so much where to begin, but where to finish.

I like to work on several pieces at a time leaving the studio full of canvas at various stages of development. I suppose I do not consider a painting finished until the client comes and takes it away. In the course of every day, I try and move on my own path of discovery. I try not to limit myself to one medium or genre. I do prefer my work to be spontaneous expressionist and allegorical beyond that who knows where tomorrow will lead.

If I could paint with the fire of Picasso and the soul of Chagall, I would certainly find my nirvana. For now, I am content to paint all I can with my feet on the ground and my eye fixed on the strange balloon moving toward the infinite."